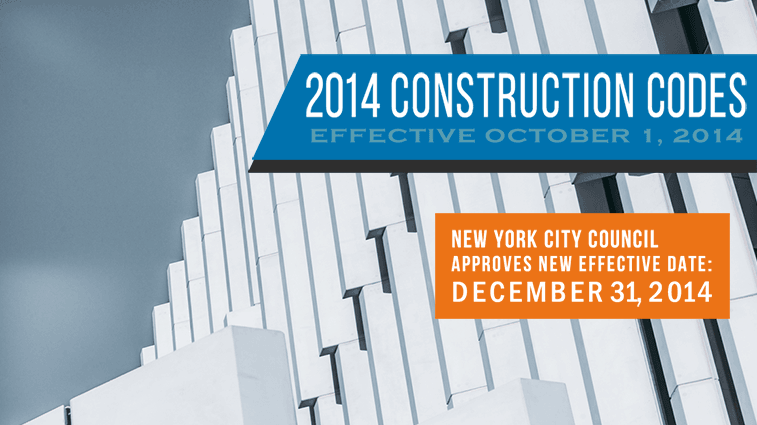 Kicking the Code Down the Road

New York City Council passed Intro 472A and 474, effectively postponing the implementation date of the new 2014 Building Code back to December 31, 2014. The new building code had previously been scheduled to take effect on October 1, 2014.

The extension came amid concerns among industry professionals that more time was needed to review the impact of 2014 code changes. The DOB made the 2014 code available on their website, but have yet to offer a published copy of the code. When the 2008 code became effective July 1, 2008, the DOB gave the option of using the 2008 code or the 1968 code for new developments for one year.

According to City Councilman Juamanne D. Williams, Intro 472A and 474 “clarifies various changes to the construction code and allow agencies and professionals extra time to gain familiarity with the new codes.”

Other filing representatives that either tried to beat the deadline or planned their projects according to the 2014 code may feel the crash course was all for naught. There has been an unprecedented rush of job filings in anticipation for the October 1st deadline, throttling the DOB’s e-filing portal. Expect job filings to continue at this brisk pace before the next deadline on December 31st, 2014.