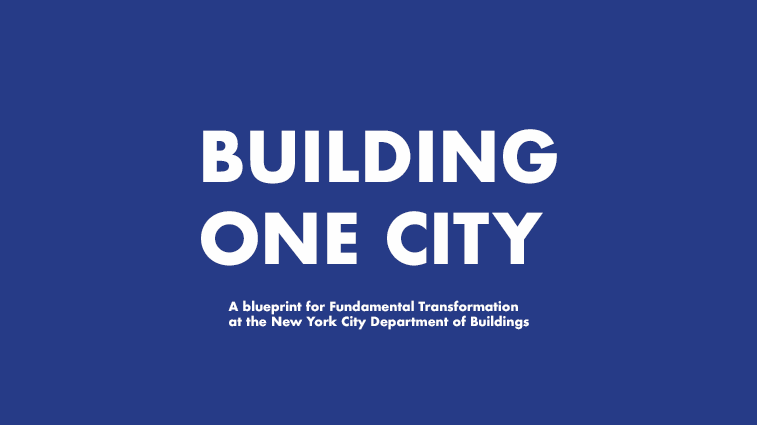 DOB Plans its Own Renovations

The DOB recently released Building One City, its document outlining specific plans for improvements in the next year. The department is scheduled for additional $4.6 million in funding for 2016 and will seek to streamline its services, modernize its technology and take punitive measures against egregious policy violators.

The DOB plans to use some of this capital to improve its digital offerings. It plans to replace its Building Information System (BIS). The new BIS interface will include an accounts feature with a payment portal for project transactions and a virtual portal for meetings with department staff.

The DOB wants to move most of the filing process online. This includes plans for online scheduling of development inspections, notification of inspection results, an expansion of the Development HUB to outer boroughs and virtual plan review with plan examiners.

The DOB plans to improve the plan examination process by hiring 159 examiners and 34 development inspectors. In addition, the DOB plans on hiring 10 Project Advocates who will assist in technical and operational issues on a project or property. As mentioned above, the DOB hopes to expedite the process by shifting all plan examinations online. Plan objections will be standardized, eliminating confusion around the language of written objections.

Perhaps the most ambitious project in Building One City is the creation of a new code for existing buildings. This new code, based on the International Existing Building Code, would streamline codes for buildings existing under the 2008, 1968 and previous codes. A streamlined code for pre-2014 buildings would make compliance for alteration projects easier on design professionals, plan examiners and inspectors.

Integrity is a key theme in Building One City. The DOB aims to reduce staff fraud by increasing transparency throughout the filing process. The DOB intends to discourage what it calls “bad actors” by releasing an Industry Code of Conduct. The Code of Conduct will put forward standards and requirements for developers, design professionals and other stakeholders.

Building One City makes clear that increasing public safety is an aim for the DOB. The recently created Office of Risk Management will be key in pinpointing buildings unsafe to the public. The DOB will also enhance its existing audit system, shifting focus onto the largest, most complex projects.